The pink/black zipper bags are for my son's girlfriend (she has two kitties) - the rick rack one is lined with black, and the other one is lined with lime green batik :) She liked them (at least - she SAID she did!).

I made this little guy today (finished to 8" long x 3" high x 4" wide) loosely based on this tutorial. I actually made 2 of them but in the first one, I didn't add the ribbon tabs - without them the bag is somewhat awkward to handle, so I changed things up when making the second bag. The original tutorial called for fabric cut 6" x 8" - I knew that would make a very small bag so I cut my fabric 8" X 10" --- the zipper is sewn along the 8" length. I cut out 1 1/4" squares to box the ends (1 1/2" squares in the first bag were too deep for my taste). Next time around I'll make the bag a little bit longer, cutting the fabric 10" x 10", and staying with the 1 1/4" box cutouts. (Posting this information to my blog gives me a way to look it up the next time I make these, LOL). I'm going to have hubby take this to work to give to a guy he works with - my husband and I are friends with the co-worker and his wife, but she doesn't read my blog so this will be a "just because" surprise :)
Posted by Sandra :) at 2:18 PM 3 comments:

completed a couple more gifts to go in my box - a puppy tote (with matching zipper bags, of course) ... and some fruity lady zipper bags using up the last scraps of that FQ. You can see each bag is pieced differently - that's because I was using up every last inch of the fabric, however I could make it fit, lol. Nick's jeans have certainly proved useful for me, after they were too worn for him! ;)
Posted by Sandra :) at 12:37 PM 4 comments:

11 or 12 years ago (ish) my brother dug up some tiger lilies from his house in Smiths Falls, and planted them here in our garden. Over the years we had to move the lilies several times - once because the flower bed got removed when the front porch was replaced, and then again when we realized that they didn't like their new home at the side of the house. They apparently didn't like their new home at the back of the house either, as all we ever got were skinny spindly stems with bug-eaten leaves - no blooms for probably 8-10 years. This year hubby suggested moving them to the front yard where they would, we thought, get a LOT of sun. Apparently that was the ticket, as we they've been doing well since the little stems were transplanted. And today, Brian's lilies bloomed. They're decendants of the ones he planted, so they're still Brian's lilies. He's been gone for just over 10 years now, but his lilies are back and blooming beautifully. Cheers, Buzz! :) 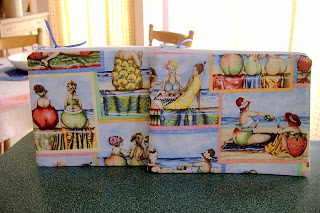 I can't stop making these little sweeties - I just finished these ones up for a gift - isn't the fabric a hoot? LOL!
Posted by Sandra :) at 2:28 PM 3 comments: 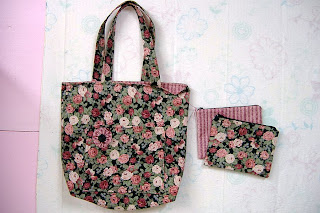 I made up this little set yesterday and today - the tote is 15 x 13 x 4 with a box bottom, is lined with the pink striped fabric, and has one pocket on the outside (with a yoyo decoration) and one on the inside. The two zipper bags are fully lined, and measure 8" x 6". The set will go in my "donate for a fundraiser" pile :D
Posted by Sandra :) at 3:19 PM No comments:

A little bit of shopping :)

Thanks to my Humira injections, my psoriasis has improved to a stage where I can not only walk without my cane, but I can now spend some time shopping :) For a while hubby was doing ALL of the shopping as I wasn't able to stay on my feet for longer than a few minutes at a time (and those few minutes were agonizing). Some days are still better than others, but overall things are so much better than they were less than a month ago (I started the Humira on June 22). I am positively THRILLED :) 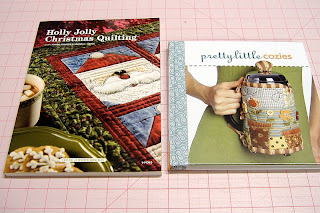 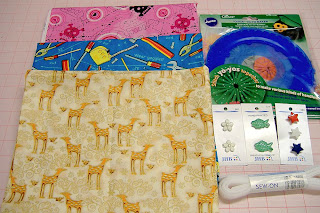 Hubby and I went to Buffalo on the weekend for a bit of a shopping trip. We went to a Lavender Festival in Niagara on the Lake, then headed across the border to visit a couple of Joanns stores :D Joanns didn't have anything on sale that I was interested in so I only picked up a couple of books, a little bit of fabric and a few notions. We also hit Aldi (thanks to Kim & Heather for telling us about that fantastic store a year or so ago) and stocked up on cream cheese, shredded cheese, sliced real cheese, butter and some pantry items :) My feet held up for the entire trip (we left at 9:30 a.m. and got home at 10:00 p.m.) - life is GOOD :D

I've gotten a little bit of sewing done in the last week or so - some bibs for a friend who's expecting her first grandy in September, and some more zipper bags. My son gave me som

e old jeans he had worn out (poor child thought I'd actually FIX them for him - instead, I cut them into as much useable fabric as I could, HAHAHA) and I used them as th

I've been on Humira now since June 22 (3 injections so far) ... I started to improve 48 hours after the first injections, and I'm continuing to improve. It's miraculous - it really is. Hopefully I don't grow a second head, get TB, die or get inappropriate numbness/tingling ;) 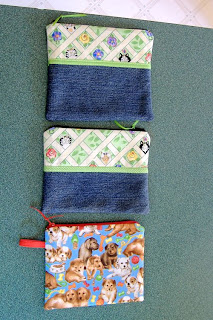 Now that I'm feeling better and can use my hands, I've gotten some sewing done - more zipper bags :D The denim for the top two bags was recycled from some jeans my oldest son wore out, and the bottom bag, with the puppy fabric, was given to a girlfriend's daughter last night - just because :D The top two bags will be mailed this weekend - I hope the recipient likes them :)
Posted by Sandra :) at 3:46 PM