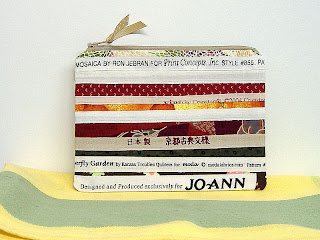 I jumped on the selvage bandwagon a few months ago, and have been saving them since then.  Today I made my first selvage project - it should come as no surprise (right, Aubree?!) that I made a zipper bag, LOL.  I'm sure that over the last 30 years of sewing I've thrown away MILES of selvages.  DAMN - I wish I'd known way back when, how much fun they are to sew with, and how cute they are!  Selvage eye candy and inspiration can be found here and here and here :D 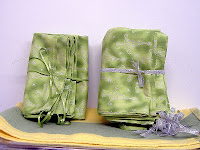 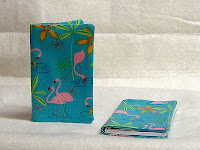 Thanks Barb!  My friend Barb (tinkquilts) recently sent me a luscious flamingo FQ - it immediately jumped under Bella (my 1953 Singer) and Cinderella'd into a couple of notebook covers!  I would have gotten 3 covers if I hadn't miscut TWICE *argh*.  I still have some pretty scraps of the fabric for a future project - thanks Barb!!! 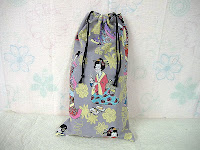 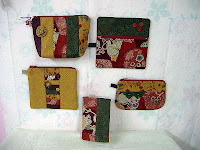 Here are a couple of recent finishes - a set of zipper bags with a matching notebook cover (tutorial here), along with a gift bag - sorry Miss Aubree, my love affair with zipper bags is still in full force, LOLOL!!  The notebook cover has a built-in ribbon bookmark - seen below - a nice touch - thanks Roslyn and Moda! 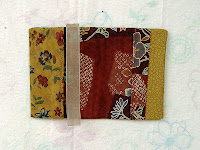 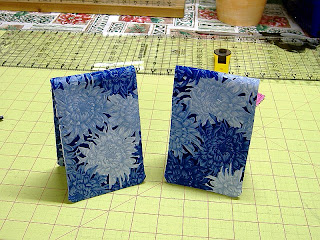 Hey Angela - I don't have to eat a bug ... HA!!!  Private joke - don't ask :D  I just finished up 2 little (5"X3") notebook covers to try out a tutorial I found - the tute was written by Miss Blossom, the daughter of Jenny of Elefantz - it worked out perfectly, and each one only took a few minutes to make :)  Thank you, Miss Blossom, for a very nice tutorial!!
Posted by Sandra :) at 10:42 PM 3 comments: 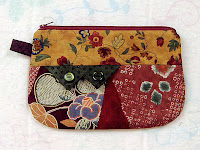 I'm working on a special set of zipper bags using some fabrics I was given and some co-ordinating fabrics I bought - here's the first bag - it's soooooo pretty!  When I get the other bags done I'll make zipper pulls to go with them - my one thumb is a bit too chewed up (aka psoriasy) to do fiddly jobs right now - it needs a few days to heal, lol. I hope the other bags go as well as this one did!
Posted by Sandra :) at 1:39 PM 4 comments:

A personal preference of mine is that zipper bags (which I love, and which I love sewing) be finished properly inside and outside - with no raw edges.  There are many tutorials online for this technique - here's a great one. 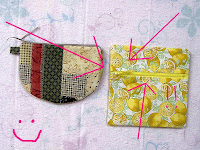 When the zipper in a zipper bag is in the middle(ish) rather than at the top, it's a whole new ball of wax.  Other zipper bag aficionados (likely a rather small subset of sewists in general, LOLOL) would agree, should the question be posed in their general direction.  Suffice it to say, it's a production to do this bag "properly", and tonight, I'm happy to say, I learned how to do it from the inventive and creative Jane in Singapore - tutorial here :)  I had a rough time with the bag - many seams were ripped, many seams were basted as a test run, and I forgot to sew the tab in at the zipper pull *oops*.  However, I ended up with a sweet centre-ish zipper bag that's fully lined on the inside, with no raw edges.  Jane - you ROCK!!  Thank you for not being satisfied to do an average job on the bag, but to come up with a great technique that I'll certainly be using again and again!  Now that I know what I'm doing, I won't have problems the next time :D 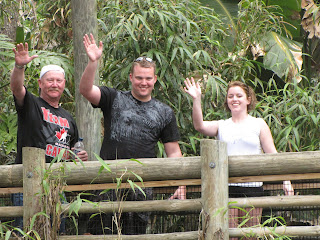 L-R = Kim, Matt, Jamie --- Kim is my big brother, Matt is his son, and Jamie is Matt's girlfriend - this photo was taken (by my SIL, Heather, I assume!) when they were in Florida earlier this year!
Posted by Sandra :) at 11:49 PM No comments: 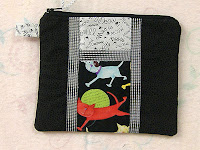 was all I needed to decide to make this zipper bag, lol.  I love using up bits and pieces of fabrics and trims :D
Posted by Sandra :) at 10:48 PM 1 comment: 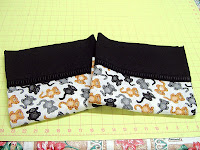 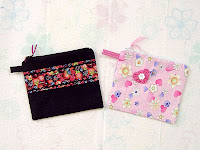 A couple of finishes for the donation box - 2 kitty cat pillowcases, and 2 zipper bags :)
Posted by Sandra :) at 8:50 PM No comments:

Getting back on track ...

recuperating from my (hernia) surgery - I'm getting better but yesterday a weird pain started, so hopefully it goes away soon.  It doesn't seem critical but it is fairly painful - I go for a follow-up with my surgeon on July 19 so hopefully I can hold out until then.  Rather annoying to have a setback during a slow but steady improvement! 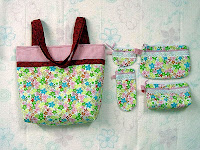 Here's a tote I finished tonight, along with some zipper bags I finished last month - I'll include one or two of the zippies with the tote as a set, and the extras will be donated to the shelter for fund-raising.  The tote is a Dandy tote from Dandelion Quilts - I cut mine 2" wider than the instructions because I like my totes big :)

Have a peek here for a spectacular loaf of bread I baked today, and the pasta salad I made yesterday - - if I wasn't on a diet I would have eaten the whole loaf and at least half of the pasta salad, lol.  SERIOUSLY!!  Holy crap they were good!
Posted by Sandra :) at 11:12 PM 1 comment: