My whale didn't work out - it died a slow and painful death in my craft room, and was suitably buried at sea (aka thrown into the scrap bin) with little fanfare :D  My fellow challengee Barb, however, not only rose to the occasion, she whipped it's a$$!!!   Sheesh even if I *had* completed a whale it wouldn't have been nearly as divine as hers - she truly made a whale of epic charm and prodigious prettiness!  I think I'll steal her photo and post it here - Barb - I hope you don't mind!! 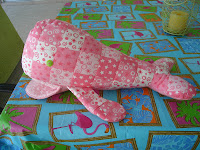 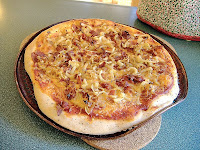 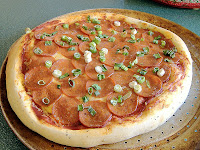 While my whale stuffy making may not have been successful, my cooking was :D  Today I had the urge to make pizza for supper for the guys.  I made a bacon and onion pizza ... a pepperoni and onion pizza ... and for dessert, an applesauce spice cake!  The guys said everything tasted great, but I think the bacon pizza deserves special recognition - I humbly believe it might be the most beautiful pizza ever made!  Yes, be amazed by my humility - I am!! ;) 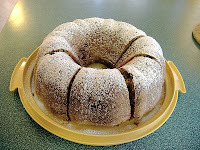 My old laptop (3 1/2 years old) was starting to develop problems (even tho I'm a fanatic about maintenance) - rather than spending money upgrading the RAM and getting it repaired, hubby told me to just buy a new laptop.  So on the weekend we went to Best Buy and bought a new Toshiba - I'm still getting used to it.  I'm unimpressed with Windows 7 (I prefer XP) and I'm really pissed that I can't use OE any more - I downloaded Mozilla Thunderbird which I think is inferior, but which comes highly recommended by various sites online.  I'm still trying to figure out where everything is, but I'm sure liking having a fast lock-up free computer!  The old Toshiba is downstairs attached to the printer so I can have access to all my craft files while I'm in the sewing room - what a luxury having two computers!

I'm headed to the doctor today for a consultation about some minor surgery I need - I feel like crap because I have another cold.  My Humira injections make me prone to infections, so I get colds every couple of weeks, lol.  I did have a good start to the day tho --- Monday is weigh-in day and when I hopped on this morning, I realized that after losing almost 25 pounds, I now weigh what I weighed when I was 9 months pregnant with our oldest son.  HAHAHAHAHAHAHA!!!!!!!!!!!!!!
Posted by Sandra :) at 8:55 AM 4 comments:

A link to a cute whale project was recently posted on a Yahoo group I belong to.  I think I was the one that posted it, actually, lol.  I found and saved the pattern months ago, but hadn't yet started the project.  When I posted it, another member fell in love with the project, so I issued a challenge:  we would both try to make a whale by the end of the month - she accepted my challenge!  So - Barb and I have until March 31 to get THIS delightful project completed! 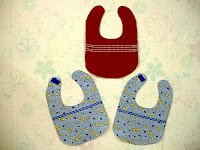 A few small finishes from projects that had been kitted up :) 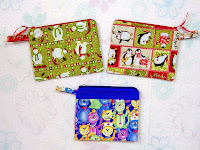 Things have been BLAH for the last couple of weeks :D

I haven't felt like doing much of anything ... my diet is stalled and I can't get past the 20 pound mark even tho I'm 100% on track ... I haven't felt like sewing ... there isn't anything WRONG - the weather is getting beautiful and I'm ever so thankfully experiencing a remission in my psoriasis symptoms (for the first time in 3+ years!) - there's no reason I should be in a funk, so I'm trying to work my way out of it! 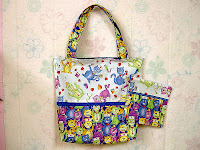 Today I made myself go down to the basement (which is dreadfully cold, which is part of the reason I haven't wanted to go down there!) to sew - I made a zipper bag to go with a tote bag I finished a few weeks ago.  Hopefully this means I'm back in sewing mode!


I had some Chapters gift cards so I ordered some books to be delivered:
200 Fast & Easy Artisan Breads and Artisan Bread in Five Minutes a Day
I quite like baking bread, even tho I'm not very good at it yet!  I use my KA mixer and I don't make anything fancy - now that I think about it, I've only made focaccia bread so far, lol.  Today I decided to make olive bread to surprise our oldest son - it's on it's second rise right now and will be going into the oven soon :D

The boys bought me a KA icecream attachment for Christmas so I also ordered a couple of ice-cream books:
Ice Cream: 52 easy recipes and Ben & Jerry's Homemade Ice Cream -- I'm not a big ice-cream fan but I'm hoping to find some lower calorie gelato or sorbet recipes in the books :)

We got new neighbours this past weekend - I met their 18 month old son yesterday and while his mom was holding him, he reached out his arms to me so I could hold him!  Sweet wee muffin!  That put a BIG smile on my face :)

I'll be headed out for a walk soon - hopefully my funk is over or almost over, and I can get back to being happy about life in general!

P.S.  Edited to elaborate:  my psoriasis has been nicely under control since June with a combination of Humira + steroids, but in the last month it has decided to improve without the steroids I usually use - this has never happened before and it is WONDERFUL!
Posted by Sandra :) at 2:02 PM 5 comments:

Stuck @ 16 pounds - dang plateau! But enough about that :D 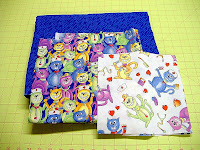 These are the fabrics I pulled out today to work on a little project -- more about this tomorrow :) 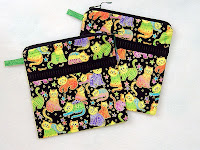 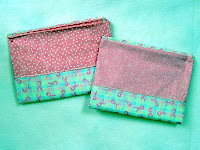 Our youngest son got his new (to him) car on Saturday - on Tuesday we found out about a recall on it, LOL - 1.3 million cars in North America being recalled for power steering problems! 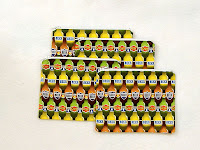 In honor of this auspicious occasion I decided to make beer bags :D  Doesn't everybody sew with beer fabrics when their Cobalt is in pain??  ;)
Posted by Sandra :) at 10:33 PM 1 comment: 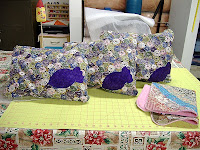 I got a bit of sewing done today -- 3 cat pillows, and one cage quilt for the Newmarket shelter - I'll see what I can get finished up this month and then take everything to the shelter at the beginning of April :) 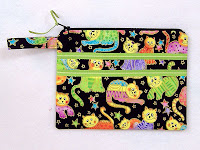 We delivered dozens of zipper bags to the Newmarket shelter on the weekend - I'm making more, but trying to use cat and dog fabrics that I have in stash - they should sell well, or they might use them in gift baskets - their call! 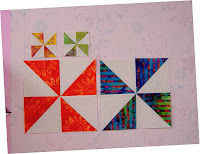 Here are a couple of pinwheel blocks I made last night, inspired by a "Pinwheel Sampler Quilt Along" from P.S.  I Quilt  :)  It appears she's doing 16 blocks - two of each of 8 designs?  So far we're to make 2 each of the first two designs, but I think I might shake things up a bit and make some pinwheels from Quilters Cache - they have lots of different designs :D
Posted by Sandra :) at 11:47 PM No comments: