I pinned this a few months ago, and have finally stitched it! I did an "upcycle" and used an old fleece blanket for the batting - it worked out pretty well, except for the iron being too hot and melting the blanket in one spot - oops!

The bag worked out quite well - the tutorial was easy to follow, and I didn't run into any difficulties.  I wouldn't use it myself - the opening is just too small for my taste, but I can see it being the perfect size for a teenager :)  I'll be donating this one to Blue Hills - I'm glad I finally got around to trying it out!

Because of the "upcycle" aspect I'm entering this in Wendy's Something Old Something New challenge - I think I'm just under the wire as today is the last day for submissions!
Posted by Sandra :) at 3:51 PM 2 comments:

Labels: Blue Hills counselling centre, Pinned then Made, Something Old Something New Challenge, Try something new, tutorial (link to)

Oven baked eggs - pop 'em in a muffin pan and bake 'em for 25-30 minutes @ 325F - presto - hard "boiled" eggs - pretty cool!  Mine got a brownish area - next time I'll give it a little turn at the halfway point - that should clear up the problem.  I used my toaster oven instead of heating up the big oven for 2 eggs: 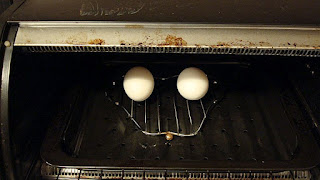 A dolly quilt for little Miss A :D

Zoomer wants to keep the quilt, but knows he has to give it up to Miss A (14 months old) :D  She's not going to mind a bit of cat fur on it - there are 2 dogs and 3 cats in her house (including 2 marmies!), and she rules all of them, LOL! 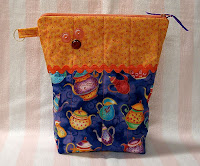 I'll call this the Mr. Pibbs pouch - I finished this one today, with scraps given to me by Deb - it will go to Blue Hills :)

The buttons I added are vintage buttons - the two on the top are from my MIL's collection - I met her in '83 and never knew her to sew, so they're 30+ years old :D

I tried a new design today - one I had pinned :)  It's quite small - 6 x 4.5 x 2 - that's smaller than I'm used to making.  It was easy to do though!  Next time I'll add an inch to the width and to the height and see how that works :D  The fabric is reclaimed from upholstery samples, bought in Ohio during a trip a couple of years ago!  I'll enter this in Wendy's Something Old, Something New Challenge :)
Posted by Sandra :) at 11:50 PM 4 comments:

Labels: construction notes, Pinned then Made, Something Old Something New Challenge, Try something new, tutorial (link to)

Here are 2 more Anna-Noodlehead wide open pouches - love this design!  These bags are dedicated to Vera - hey Vera - this pic is for YOU! LOL! 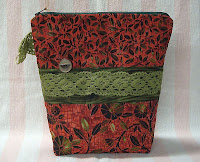 Here's another tall pouch for Blue Hills - this fabric was given to me by a friend during a stash clear-out - she cleared - I benefitted ;)
Posted by Sandra :) at 11:47 PM 7 comments:

Definitely not safe for work :D

I started reading 50 Shades of Grey yesterday - when I mentioned it to my neighbour, she sent me on a search for this video.  She said it was pretty darn funny.

Gilbert's voice reading *that* is hysterical enough, but to see the women's faces as he reads --- I have watched it over and over and over, and I still scream each time, LOL!  Definitely not safe for work, and if you're offended by graphic/raunchy content - don't watch the video - you've been warned!

My friend no-blog Chris recently gave me a bunch of scraps --- these ones are from a S'mores quilt she made for her daughter :D  It occurred to me to make zipper bags out of the scraps ;)  These will be going to Blue Hills for some lucky (iidssm!) kids :)  Two are tall pouches, the smaller one is pencil case sized.  They're all lined with lime green fabric - one of my favourite colours, lol. 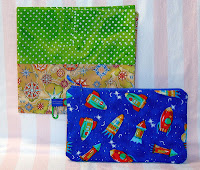 Stash-busting time - the pillowcase was made to use up the last of these two fabrics from Joanns, and the zipper bag is one of the last 2 scraps I found in stash of that rocket fabric (also from Joanns, and I don't see it there any more).  These will both go to Blue Hills as well :)

A Zaaberry messenger bag (kid sized) I recently completed - the covered buttons couldn't be easier to make.  Cut a circle, gather it with basting stitches, tuck the button blank inside and pull the thread, stick the back on and push it down.  I think it took about 2 or 3 minutes to cover each button - will pick up more blanks at Fabricland's 50% off sale :D

Here's a side view of the messenger bag - I have 5 DVD's (in plastic cases) tucked inside, which should give you an idea of the size :)  This messenger bag (and the teacup bag below) will be going to Blue Hills :)

And last, but not least, a couple of zipper bag finishes --- the teacup fabric (left, purple) was given to me by my friend Deb in AZ - thanks Deb!
Posted by Sandra :) at 12:14 AM 5 comments:

Here's part of a birthday gift I got done today - a pair of "Tugger" pillowcases :)  I'm not familiar with the television show that Tugger belongs to, but it's sure a cute fabric for little boys, lol!
Posted by Sandra :) at 11:59 PM 3 comments:

Thanks to Anna Noodlehead and her fantastic tutorial I've learned a new technique, so open wide and check it out!  Even though I've sewn dozens of zipper bags, I was nervous about this zipper installation because it was different than any I've done before.  The zipper extends past the edge of the bag, allowing it to be "opened wide" - so very handy! 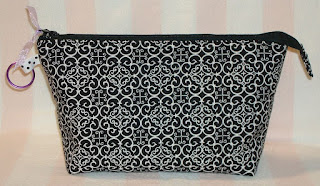 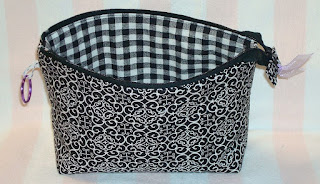 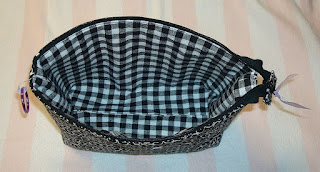 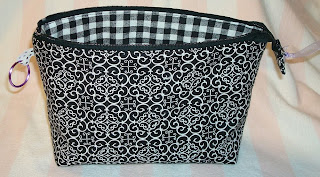 I LOVE IT!! It was no more difficult than any other zippy I've made - it just took a bit more time.  The one change I made to the tutorial was to cut out 1" squares from the bottoms to box them, instead of the folded method in the tutorial.  One other thing I would do next time is to trim the seams at the zipper, so I can press that area flat.  Other than that I followed the tutorial exactly, with marvelous results.

Not only does she give a fantastic tutorial - here - she also provides us with a slightly different version in multiple sizes - here - you can bet I'll be making these in all the sizes, lol!  THANK YOU ANNA!
Posted by Sandra :) at 11:35 PM 8 comments:

Labels: construction notes, LANT, Pinned then Made, Try something new, tutorial (link to)

The fabric for the tall pouch (top left)
came from my friend Deb in Az - thanks Deb!  The other bags were made from stash fabric - the cat bag is an Across the Pond pouch, and the boxy bag is a regular boxy bag cut to 11x14 (after quilting), which turns out to be a really great size.  These will all go to Blue Hills :)
Posted by Sandra :) at 3:52 PM 4 comments:

I challenged my friend Allie tonight to try to sew (or embroider) for 15 minutes per day - like a lot of us, she's in a summer slump.  I've been doing a bit of sewing but hadn't felt like getting the camera out, so had no photos to blog :D  I wanted to get pictures of my Purse Palooza bags tonight so with camera in hand ...

Here are my entries for the Purse Palooza 2012 challenge :) 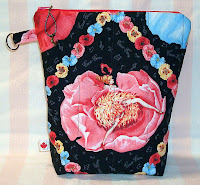 The cancan bag is a gift - this print is one of my favourite fabrics - I just love the kicky look (pun intended!) :)   It was designed by Mary Stewart for Elizabeth’s Studio :) 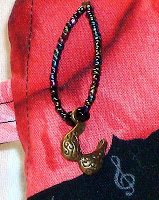 I thought this would make a fun zipper pull to go with the bag theme - charm is from (Etsy or Ebay - I forget which!) :) 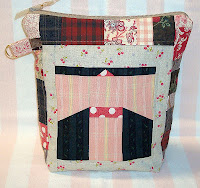 Several weeks ago I won a scrap giveaway from the lovely Cynthia in Japan.  Here's the bag I whipped up to showcase some of the scraps :)   The paper pieced kimono block was a freebie download from the AJ Padilla site years ago (I don't think it's there any more), the back is a taupe linen, and the lining was purchased at Joanns a couple of weeks ago, just for this bag :)

Here are the last finishes I have for June - I hadn't felt like taking pictures so projects got piled up - then I realized I couldn't make my June collage until I got everything photographed, LOL!

Tomorrow I'm working on another upcycle project - kitchen towel holders made with a tablerunner I scored @ the thrift store - this will also be for Wendy's Something Old, Something New challenge :D

Labels: Something Old Something New Challenge, tutorial (link to)