Merry belated Christmas, Happy belated New Years, and HELLO!   I hope the holidays were good to you, and that you made it through them without going crazy :)  I was rather sickly during the month but managed to get most of my Christmas sewing done ... note to self ... don't leave sewing with December due dates, until December.  **** happens, and it's not fun to be doing Must Do sewing on Christmas Eve, haha.  Maybe I'll be better prepared in '18 - one can always hope!

Here are a few finishes from December that I don't think I've posted. At least - they've been sitting in a draft post for a while, so I assume I haven't posted them! 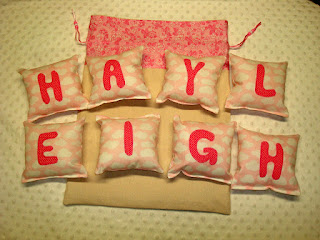 Beanbags for a little girl who will be 2 in a few months - I'm thinking of doing number beanbags for her 2nd birthday, with the same pink cloud fabric so the sets match :)  I hope she liked them - I haven't heard from the parents. 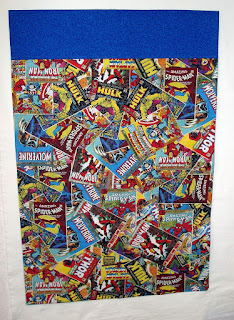 Superhero pillowcase for the brother of the little girl who got the beanbags. I hope he liked it - it would have been nice to hear *sigh*.  (I know I'm not the only one that that happens to!)

I have more things downstairs that haven't been photographed, but I think they're all donation items.  Apparently my goal of being more organized in 2018 hasn't yet taken effect, haha.

My sister gave me the funniest gift for Christmas - a box of 100 flamingo mailer envelopes from Amazon - she absolutely nailed my sense of humour :D    I told her that I was going to use them for anything I would be giving to anyone and that when I use them all up I'll be asking her for another box - HA!  I sent her these pictures earlier this afternoon - the husband of a friend of mine recently had a car accident during an ice storm (he was fine) - I thought that some flamingos and treats might make him smile :D 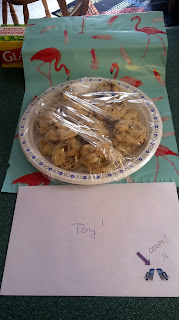 I think this will fit in the envelope ...

And now I'm off to get supper ready --- I'm doing to do Chicken Tortilla Soup in the Instant Pot, and hubby is going to bbq some steaks.  I was supposed to do roasted potatoes to go with --- I better get those in the oven pronto, LOL!